I grew up a happy kid. I had a loving family and lots of friends. I loved school. And then junior high came along and knocked the wind out of me. I became a victim. A completely taken-off-guard victim of a group of boys who seemed to live for the express purpose of bullying me. I was lucky – I wasn’t thrust into the role of school pariah – there were others who held that role. I still had my friends, which is more than a lot of kids can claim. But it didn’t make the torment any easier to bear.

I walked the halls of school with my head down, avoiding looking at anyone, praying that the bullies wouldn’t notice me. But they did. They always did. They called me a bitch. They said I was tight (which in those days meant you were a virgin, which is hilarious because each and every one of us – including them – was, by definition, “tight”). In the next breath, they called me a slut. They threw things at me. They egged my house. They left threatening notes. They turned my last name into a horrible insult that they screamed at me all day, every day. They spit on me. My friends supported me in private, but no one defended me publically – no one wanted to out themselves in the spotlight. The teachers, who witnessed at least some of it, never said more than a quick “knock it off.” I never told my parents, because I was embarrassed – as it if were my own shortcomings that were to blame for these boys’ behavior. Instead, I went home every day and hid in my room and sobbed. I thought about how I wanted to run away. I thought about how I’d be better off dead.

Luckily, I never gave in to the horrible feelings. Luckily, it stopped eventually – it did get better. But for some kids it doesn’t get better.

Ever since I saw the trailer for The Bully Project (now known as Bully) last year, I knew that it was an important film – one that all kids (and parents) should see and talk about. So as it neared the release date, I was disappointed to find out that the MPAA had given it an R rating, meaning that kids would not be able to see it without a parent or guardian present. And that it would not be able to be screened in schools, where it most should be seen.

The reason for the rating is the language – the film contains footage of kids swearing, the word “fuck” in particular. And while I swear like a sailor, I do understand that not everyone wants their kids to be exposed to that kind of language. But there are exceptions to every rule and I think this is one of them. I know that the MPAA has rules about why a film is rated a particular way, but those rules are based on content alone. And sometimes I think that things other than content need to be considered – things like intended audience and message and possible effects of the film. And while content is obviously the easiest, most black & white way to make a determination, while the other things are essentially gray areas, life is not black & white. Ever.

Life is filled with gray areas. The message and the potential benefits of this film far outweigh the possibility of someone being offended by the language. And the MPAA knows this – an R rating (that was given for the very same language) was overturned for Gunner Palace, because it was a film about the Iraq war & the language was real – and the MPAA agreed that it was important for young people to see what soldiers really go through. How is Bully any different?

It bothers me that a film can have racial slurs and be given a lesser rating than Bully. I’d rather my kids hearing swearing in this context than hear racial slurs any day – they are FAR more offensive. And let’s be honest here – the kids are already hearing this language – in school, on facebook, at the mall – everywhere. I sat at an elementary/middle school night at the skating rink last night and heard it 3 times from the mouths of babes. I didn’t like it, but it’s there. It’s life.

This film is real life. Sure – the language is offensive to some, but that is exactly the point of the film. The language in question is being used by kids to hurt and taunt and humiliate other kids. It should offend viewers. It should offend them into standing up for other kids. It should offend them into doing something about bullying. Bullying has been a problem for many years, but it seems that it is getting worse as time goes on. More and more, we hear about a child committing suicide over being bullied. We all know about Matthew Shepard and how he was murdered because he was gay. Smart, kind, beautiful, amazing children are afraid to go to school and don’t achieve all that they are capable of because of the effects of bullying. So what’s worse – our kids’ tender ears hearing a bad word, or working together to try and change something?

Last week, I volunteered to work at the book fair at The Girl’s school. It was fun – helping kids pick out books is awesome (Yay, books) and watching them make their decisions was highly entertaining. I especially loved when little kids picked out longer, chapter books or when a tiny little princess girl surprised me and got books about Star Wars and the Titanic. I love that they provide a free book to every kid, so no one leaves empty-handed.

What I didn’t love was something that was being sold. Up near the checkout, there is always a desk with pencils, erasers, sticker & bookmarks that the kids love, because there isn’t one of them who wants to come home with change – they NEED to spend it all. And in the collection of stickers, there was this: 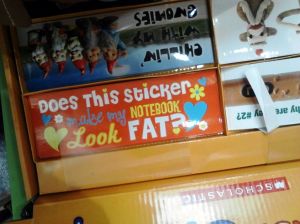 Dear Scholastic Books – usually I love you, but this? Really? REALLY? Don’t you think our girls have enough to worry about? I mean, I get that it isn’t talking about anyone’s body, but anyone who has lived on earth in the last…I don’t know…forever, knows this is a mainly used in the context of women and their weight. And while one can argue that nothing about this sticker is making a statement about anyone’s weight, at the very least, it makes a mockery about people who are (needlessly or not) worried about their weight or struggle with poor body image. It’s like getting it from both sides: “Don’t be fat!” but “Don’t let anyone think you care about being fat.”

The corporate mission of Scholastic is to encourage the intellectual and personal growth of all children, beginning with literacy, the cornerstone of all learning. With more than 90 years of experience supporting the learning lives of children, today Scholastic remains committed to providing quality, engaging educational content in digital and print formats for the next generation of learners, and the families and educators who guide them.

I’m not sure how this sticker fits in with “encourag(ing) intellectual and personal growth”. It might seem like a cute, funny statement to the folks that came up with it, and who knows – maybe I’m over-reacting – but I’d venture to say that the humor is most likely lost on 5 – 10 year olds, anyway. But maybe not the damage that insecurity and body-shaming can do. Having a sticker like this in school makes it OK – makes it normal to joke about weight issues. And I’m just not comfortable with that. Raising my daughter to be a strong, confident person is hard enough without something like this.

And even if there is nothing at all wrong with this sticker – even if you don’t find it inappropriate or insulting, why not have positive messages available to kids? Sell stickers that proclaim how smart or strong or kind my daughter is – not how fat she (or her notebook) might look.
You can do better, Scholastic. See – it’s not that hard: 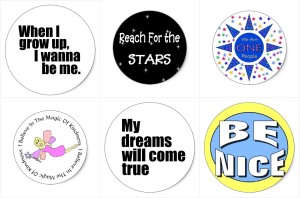