Standard
I had thought this weekend was going to be nice and relaxing, but I was so very wrong. The boy’s chorus was singing the national anthem at the baseball game and the school, in their usual fashion of last minute bullshittery, sent home a paper on Thursday saying that the kids must wear khaki pants or shorts and red shirts (the school provided the shorts). This apparently, was the ballpark’s rule and not the school’s. And I understand wanting them to match. But what I don’t understand is why they decided to send the damned thing home on such short notice. They sent home the info on the concert and the order form for the tickets over a month ago, so I’m not sure why they didn’t include this information then.

Oh – and also? In the snippily worded memo, it stated that “students WILL wear khaki pants or shorts – NO DEMIN!!”

Yes folks, I am entrusting my son’s education to people who a) can’t spell a five-letter word, and b) clearly have never heard of spell-check. Ladies and Gentlemen – your tax dollars at work.

I got up Saturday and was preparing to go out shopping and then go clean the car. But at the last minute, I remembered that it was collection/packing day for Scouting for Food. I jumped in the car with the boy’s uniform, picked him up from Rapunzel’s house and rushed to the church where we were doing the packing. There, I spent the next 3 and a half hours picking up, sorting, packing, boxing, carrying and loading approximately 352 billion cans of food. Which: Yay for fighting hunger! And also: Boo for my back!

After the packing, I ran home to get the girl and we went out to run our errands. We ended up getting the boy’s shorts (and getting some for Hedge’s son – Hedge – being another victim of the bullshittery – was busy and couldn’t get out shopping), plus some odds and ends. We went to a sports outlet store and got some Pirates shirts for a couple bucks each. A lot of the stuff is from previous years, but for the prices, who cares. And since the Pirates suck balls, it’s hard to spend a ton of money. Mine shirt was actually an All-Star game shirt and not a Pirates shirt, but it did the trick for a buck.

The reason I didn’t get a regular Pirates shirt was that the only ones they had for women were those pansy-ass pink ones, which I HATE. I don’t mind pink in general – I have pink shirts and pink shoes and pink candles. But I hate the pink sports jerseys. I hate them and all the other stupid “girl-centric” pink bullshit sports merchandise that they keep trying to get me to like. Because NO. I will not like it. I will continue to hate it. The day the Pirates/Steelers/Penguins start wearing pink is the day I will buy a pink jersey – not a moment before. I hate the idea that in order to appeal to women, you need to make everything all pink and girly. I don’t know about the other cities, but here in the ‘Burgh, we women love our sports – we love the black and gold. We paint our faces and wear our jerseys and drink our beer and get just as rowdy as the men. We will buy the same shirts as the men. Please don’t insult us by thinking that you need to make it pink. I mean, just pass me a wine cooler, hang some tampons from my ears and shoot me, why don’t you?

So, uh…down with the pink sports gear!

Also on Saturday:
Cleaning out the car – SUCKED
Washing the car – SUCKED
Eating a chocolate covered frozen banana for lunch and having it fit into my weight watchers plan – AWESOME! And a little porn-y.

Sunday was the game and mr b and the girl stayed home, since she was sick. Mr b didn’t mind, though, since the Pens game was on. It was nice for me, too, because Hedge came with me and we had a nice day together, which we rarely ever get. We drank beer and ate and laughed and acted like jackasses. I used up my entire days; points, plus all my weekly points, too. And I didn’t even care, because I wanted beer and wings and pizza and ice cream. Well, actually I got frozen yogurt, because I always make wise food choices. Hahahahahahaha! I’m just hoping that since I did stay within my weekly points that I haven’t screwed myself this week. Because that would suck. But those wings were good.

I was truly more interested in the Pens game than the Pirates, but I drew the line at being the jagoff who wears a different sport’s jersey to the game. I was, however, the douchebag who sits through the baseball game with one earbud in, listening to the Pens game and shouting, “Yay!” when Jordan Staal’s goal came at an inappropriate time in PNC Park. But I don’t care, because Pens rocked!! (and rocked it again last night – woooo!)

Oh and also – Jagr? Shut the fuck up.

Lastly, because I am a huge dork – the biggest dork that ever dork – a dork to the nth power (Who uses the phrase “nth power”? I’ll tell you who – a dork), and also to get maximum Embarrass Your Kid points, I took the Pirates up on their “get your text on the scoreboard” invitation (I was going to make it something about us being dirty whores, but I figured they’d censor it. Bastards): 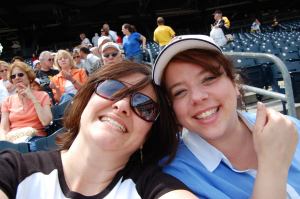 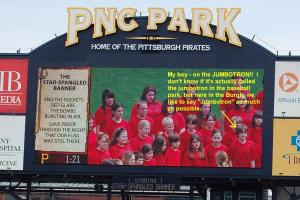