On Tuesday, I got a call from a local radio station saying that I was a winner! That’s it – they just wanted to boost my self-esteem a little. No – actually, they were calling to tell me I had won an iPod nano and a $50 iTunes card. They were having a contest sponsored by Diet Pepsi for an “escape” to Arizona. You had to write in and tell them why you needed an escape and they would pick one preliminary winner a day and then a grand prize winner out of those four. I almost didn’t enter because I usually don’t enter two-part contests because the preliminary prizes are generally a cd or something I don’t care about. But this time, I figured an iPod would be great because mr b is very jealous of mine and the boy’s. And the clincher was that when I was considering entering, the weatherman was telling me about snow and I thought about Arizona and thought, “Oh yes I DO need an escape.”

So anyway, Tuesday morning I was happy and mr b was happy and then I realized that I now had one in four odds to win the grand prize! And Holy Shitballs, on Friday morning, I got the call! I fucking won! In September, mr b and I will be spending a weekend in Scottsdale, Arizona at this beautiful resort. I am so excited! We also won a Visa gift card, a blu-ray dvd and a two-month subscription to netflix. Woo!

After getting the call on Friday, work was pretty much out of the question, especially since it was a slow work day, so I took the afternoon off and had a “girl’s day” with my bean. The boy was off to the movies and a sleepover, so she and I headed to the radio station to pick up our prizes and then headed out to eat and shop.

The girl had a couple of bucks to spend and we went into Claire’s. While we were there, she noticed the piercing chair in the front of the store and asked what it was for. When I told her it was where people got their ears pierced, she asked me if she could do it. I was a little surprised since for the past couple of years, she has been saying that she wants to, but not yet – when she’s bigger. I was worried she would be upset that it hurt, even though I was honest and told her it hurt a little bit. But she surprised me and both of the piercing ladies (they did both at once) by not only not crying but not flinching at all. Her expression never changed, except when she looked in the mirror and broke out in a huge smile. She told me that she was always jealous of people with pierced ears, but now she didn’t have to be. She kept saying how proud she was of herself (and jealous of herself), and how she was so big now. She looked in every single reflective surface she came across all that day and night. And she told just about every single person who even looked in her general direction, “I just got my ears pierced!” 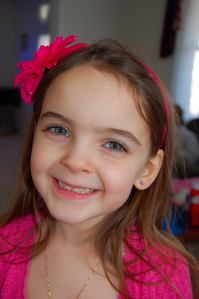 Saturday, I had planned to clean the house, but that never really happened. I had the kids clean their rooms while I boiled eggs and prepped for dyeing them, which was a great idea in theory, but in practice, it was more me boiling/prepping all the while breaking up fights about who was cleaning and who wasn’t,(if only they spent as much time doing what they were supposed to as they do worrying about what the other is doing), kids getting distracted by everything that wasn’t room-cleaning, having to answer “is it time yet?” approximately twenty-seven thousand times, breaking up more fights, and denying requests for “a break” (because apparently 10 minutes of not cleaning is exhausting). Great fun.

After we made our groovy tie-dyed looking eggs, I was ready for a break, but immediately the “when are we making the cupcakes?” inquiries started. Yes, I – hater of baking – decided that the kids and I should make these adorable Bakerella cupcakes. See how cute those are? I assure you that ours where not even on the same planet of cute. My icing wasn’t quite thick enough (actually, it was exactly the way I like it, but not the best for “gluing” on the candies). And my sour punch straws were too short for handles – I don’t know if there are different size packages or if Bakerella is just magical. I think the latter. I ended up using rainbow twizzlers. They looked OK, but they were heavy and fell over. Then I discovered that I had one package of Airheads extreme things which are flat and multi-colored and they were actually perfect. But once I covered the cupcakes so they wouldn’t dry out, they – well – didn’t stay dried out enough – and the handles all collapsed. But even after that, they were still sort of cute. Until I dropped the container carrying them to my aunt’s Easter dinner and they all smooshed around. Whatever – they still taste good (minus the god-forsaken sour airheads).

Sunday was dinner at Aunt Twin’s house – the kids had a great time with the egg hunt I set up for them. I was smart this year and color-coded the eggs – one color per child, to ensure that they all got equal amounts of candy and prizes, which worked out really well.

Anyway, this is the most boring entry ever. Here’s hoping I get more interesting soon. 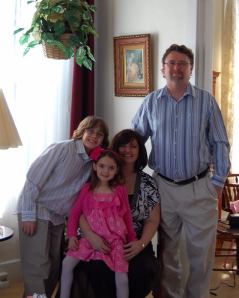 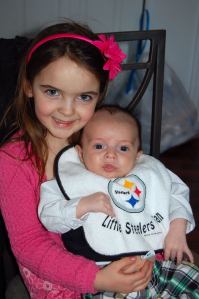 Today is my first day back in the office after a busy and somewhat stressful weekend. I can always gauge how stressful my weekend was by the feeling I get when I walk through the office door. Most Mondays are the “ewwww, work” variety – that means it was a pretty normal weekend – some fun, some relaxing, with a touch of sibling annoyance and husband pain mixed in. but after weekend like this one, I walk through the office door and my blood pressure actually goes down. Because even though I have to work and even though I have to deal with a pain in the ass coworker and even though I have my fat ass crammed into pantyhose, by God, I will not hear, “He’s touching my stuff!”, “I just wanna see it!”, “Stop it!”, “You’re mean!”, “I’m telling!”, “Go AWAY!”, or “STOP TOUCHING ME!!!!!!” SO, yay, work!

Dear Stacy,
You rock. Especially the part where you put the note in telling me not to eat the soap. Because I read it at the last minute and was very near shoving it all into my big, gaping piehole. Love and kisses,
Gina

Friday I worked from home and we had an extra child in the house – our nephew, Dil (great nephew actually, but I didn’t say that since it makes me sound as old as dirt, when in actuality, though I am as old as dirt, it’s mr b who is three days older than turpentine and can say he has a great nephew. Also – did anyone get the turpentine reference? If so, I will love you forever)

Anyway, having an extra child in the house can be both a blessing and a curse. A blessing because it keeps the kids busy having someone else to play with. A curse because – hello – it’s an extra kid in the house. The girl was thrilled to have him there, since they are close in age and she adores him. The boy, I figured would ignore the presence of another rugrat and play wii or something. But no, even though he won’t play with his sister and probably wouldn’t play with Dil if were actually his brother, he thought it was great fun playing with him on Friday, much to the dismay of the girl, who wanted Dil to herself. I suspect this added to the boy’s enjoyment. At one point, they were playing light sabers and she was pissed off at being left out and she kept telling them “it’s time for another game now”. When that didn’t work, she came over tot where I was working asked me for a pencil. I gave it to her and went on working. Then she asked for some paper. Again, I gave it to her and went back to working. Then she asked if I could write something for her. I was distracted since I was working, but I took the paper and pencil and asked her what she needed me to write. The answer? “This game is over. Mom said.”

Saturday and Easter were pretty uneventful, but busy. There was shopping and cooking and ironing and cleaning and visiting and chocolate and wine. And I made this salad, which you should go home and make right now because it is fantastic.

Then yesterday, I had to work from home again, since school and daycare were closed. And as with Friday, there was lots of “He’s touching my stuff!”, “I just wanna see it!”, “Stop it!”, “You’re mean!”, “I’m telling!”, “Go AWAY!”, or “STOP TOUCHING ME!!!!!!” So, by the time the girl started screaming bloody murder, I pretty much was all boy who cried wolf-ed out and I responded with a frustrated, “What?!? What is it now?” And then I saw her clutching her face and staggering around the room. Turns out she had sprayed perfume in her face and eyes. I grabbed her and threw her I the tub and started spraying and rinsing her eyes as best as I could, with he fighting and kicking and screaming. And you know how hard it is to open your eyes when they are burning, so I’m not sure how effective it was. I also tried to wash the perfume off her face since she reeked. I had her in the tub, rinsing her eyes for about 15 minutes, then got her out and called the doctor. They said she would probably be fine, but to call poison control. They also thought she would be fine, but damn did she give me scare. Herself too. The poor thing was in pain and crying and she couldn’t open her eyes for a good while. And her face got red and blotchy from the perfume, with her left eye, especially swelled up and looked like a red plum. Good times.

I intend to heal myself psychologically by gnawing the head off a chocolate bunny and celebrating my few hours of quiet and data management.