I’m not sure when I first started avoiding mirrors, but one day, I realized that I was. It’s not that I never look in a mirror – I’m human – I need to see to fix my hair or put on makeup or make sure my clothes aren’t on inside-out or something – which I have failed at twice in the last six months or so (though if it’s dark, I really do avoid them – a leftover fear from my jackhole neighbor boys telling my Mary Worth stories when I was five).

It’s less about avoiding the mirrors, exactly, and more about the way I cringe when I do look in them. I see a face that doesn’t look like me – or like the me I used to be. The me I want to be. I see gray hair and huge pores and bad skin and dark circles. I see tired eyes and sagging boobs. But mostly, I see fat. This isn’t who I want to be – not the fat woman, really (though I don’t want to be her, either), but the woman who hates herself, the woman who hides from mirrors because she hates what she sees.

I try to raise my daughter to never be that person. I never want her to hate herself, hate the way she looks. I never want her to be ashamed of what she looks like instead of proud of who she is. I refrain from talking about how I look in front of her. I teach her about loving yourself and the way you look. I stress to both of my kids that kindness and compassion are important and looks are not. And even though I do all that. I still worry that they will realize how I feel – that I’ll give off some vibe of self-loathing. That’s they’ll be able to read my face; pick up on my looks of disgust in the mirror the way I picked up on the looks of disgust my mom gave me as a teen, even when she wasn’t calling me fat (when I was 104 pounds – a whole other story).

I want to love myself – I really do. Ironically, when I had someone constantly telling me I was fat or trying to force me into unrealistic diets or buying me too-small clothes, I did love myself – it hurt that she said it, but I never believed it. Even after I started gaining weight (and losing and gaining again and again), I still felt strong and confident – I felt better during the “losing” times but during the “gaining” ones, I still had it in my head that I was OK – that I was a good person, that I had something to offer, that I was…well…pretty. But somewhere along the way something changed and I became the tentative, un-confident, self-conscious, self-loathing person that I don’t even recognize anymore – neither by the way I look nor the way I feel. The one who doesn’t show up in photos anymore. The one who wears the same things over and over because she doesn’t feel good in clothes anyway. The one who hides when she sees an old friend – or even worse – an old boyfriend out in public because she is too ashamed (not self-conscious, but ashamed of how she looks. How did I become this person? Where did the real me go?

I took The Girl out for lunch the other day and the wall next to our booth was a mirror and I watched as my beautiful, silly, kind, funny, wonderful daughter spent an hour looking into that mirror. Not looking and sighing in disgust, but looking and loving what she saw. She made silly faces. She posed. She laughed. She waved and kissed and fixed her hair. And she smiled. Something I haven’t done in the mirror in a long time.

I spend a lot of time trying to teach her, but watching her that day made me realize how much she has to teach me. 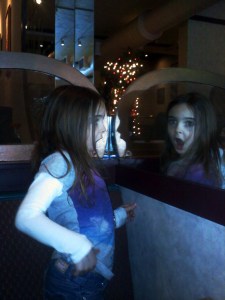 Ahh, back to the “real world”. Going back to work after the holidays I always a double-edged sword. On one hand, ughhh, no more sleeping in, no more lounging around in jammies, no more hot breakfasts and freely-flowing wine (And beer. And rum.). No more people sending gifts and cookies and home-made goodness. No more spending all my time with my beautiful, loving children. On the other hand, no more feeling like a lazy ass because I sleep too much, no more looking like a disgusting lazy ass in my jammies all day, no more sorta-almost hangovers, no more utter gluttony, what with the gifts and goodies. And no more spending 24 hours a day with my noisy, pain-in-the-butt kids.

Usually when I am working, I get up around 5:00 am or so, but this morning, I decided to sleep in a little. There was snow predicted and I figured the roads would be bad, which would slow me down anyway, so sleeping in until 5:30 would be no big deal. But at 5:00, the phone rang. And you know how it is – when the phone rings at some ungodly hour, it scares the crap out of you – you leap out of bed, run to get it wondering and worrying over who is sick, dead, or injured. So, I leap from the couch, fall over my own feet into the chair where the jackass dog is sleeping, which makes him completely lose his shit, we both tumble to the phone where I grab it and hear, “This is the Smalltown Area School District. We are operating on a two-hour delay. Thank you.”

Seriously? Seriously?? You are calling me at Dark O’Clock to give me information that will be plastered all over the no less than 6 local TV channels, six bajillion radio stations, and every TV and newspaper website within a 100-mile radius? Well, Fuck you very much, SASD! I could have slept that extra 30 minutes, turned on the TV to ANY channel and seen all 200+ delays and closings scroll across my screen for the next 4 hours if I wanted to. How fucking stupid would I have to be to miss that information? If only they put this much effort into teaching our kids something. I mean, these are the people that scheduled my son’s group music lesson at a time slot that falls 15 minutes before his bus arrives at school. The people who spend about seven of nine months teaching the kids how to take that asinine George W Bush test of bullshit and typos. The people who decided (briefly – before parent reaction warranted otherwise) that the kids were not allowed to speak at all in the halls or at lunch. So why am I surprised?

Anyway, I hope you all had a very nice holiday. Mine was pretty good overall. Other than the fact that we are still adding/renovating and my head is going to explode if we don’t finish soon, that is. I mean, if I thought we were crowded before Christmas, I was sadly mistaken. Because Now? Now we are crowded. I just can’t wait to at least get the kids’ rooms done, so we can start putting stuff away. And for mr b to finish the trim-painting so we can disassemble the spray booth and I can start to turn the basement into the playroom that it is intended to be. Because right now, the new ping-pong table is taking up all the space and I really want to start moving toys down there. And speaking of ping-pong? It makes the dog lose his tiny little mind. As soon as he hears the first ping (or pong – whatever), he goes completely batshit and starts barking. It’s funny for about 3 minutes and then you want to stuff his own head up his ass. I only wish I had a photo of the time I had to tape his face shut (oh, shut up – it was only that blue painters tape – I knew it wouldn’t hurt or de-fur him. And on one last tangent – speaking on de-furring – I got a furminator and it rocks.

OK – so I want to know – what was your best gift? Your worst? The one you were most excited to give? Your biggest disappointment?

Best – well, I’d like to say my camera, but since I actually bought it myself, it probably doesn’t count. So I’d have to say that my camera case was probably the best gift, since it allowed me to carry around the camera without acting like some freak transporting a live, beating heart in my hands. Which is pretty accurate. I’d practically shove an old lady, a puppy and possibly the Baby Jesus out of my way to avoid hurting my preciousssss.

Worst – the cute but too-small clothes that my mom got me. Though I should be used to it by now .

Most excited to give – the boy’s drum set. I’m sure the day will come that I regret this one, though.

Biggest disappointment – I was all set to give the girl a smart-cycle. There were 3,964,278,817 of them in every store. Until I had a chance to shop without kids. Then, there were none for 200 miles around. Except the bastards selling them online for twice the price. Assholes.