Hedge sent me an email yesterday telling me that she was sitting at her desk, looking at a man who was waiting for an interview with her company. Sitting beside him was his wife. On her lap was their dog. Who does that?? What on earth would have made this guy think that bringing his wife and dog on an interview would be a good thing.

You know, I can almost forgive the dog. Because although bringing your dog on the interview is clearly a sign of batshittery, there’s always the possibility of you actually being able to function in the job. But bringing your wife? This says to me that you may or may not be batshit crazy, but your wife is most definitely batshit crazy and the only thing worse than a batshit crazy employee is an employee with a batshit crazy wife. And a wife who feels it’s appropriate to accompany her husband right into the office on a job interview, dog in tow, is the poster child for the Batshit Crazy Wives Association of America.

Needless to say, this man will not be getting the job. So, just in case you were on your way out the door for an interview and your wife or husband or dog thinks it’s a good idea to come along – it’s not.

In other news, the boy has his crossover ceremony from cub scouts to boy scouts on Saturday and I know that I am going to cry and look like a blubbering fool in all the photos. I had a hard time deciding to let him join scouts because their policy on gays makes me want to vomit. But he really wanted to join, plus the fact that he’s not a huge athlete and the fact that there’s not a whole lot of options in a small town made me rethink it. The biggest deciding factor was a conversation I had with an openly gay woman who was a scout leader, who encouraged me to let him join.

I decided that the benefits of joining scouts were many, in that he would be learning outdoor skills, leadership and citizenship. I figured that I could teach him about acceptance and you never know – maybe someday he would be involved in helping to make a change in an offensive and ridiculous policy. In the meantime, he’s participated on activities that have honored and helped veterans, the mentally challenged, the hungry, the elderly and the environment. And that is always a good thing. In a few years, he’ll have to do his Eagle Scout project and since his won personal “cause” has always seemed to be homelessness and hunger, maybe he’ll have a chance to make a real impact. So while I still feel a little like a hypocrite for participating in an organization that has some views that I can’t get behind, I am also very proud of my son for sticking with it for five years and achieving what he has.

And in super good happy news, Weenie came down this weekend and we worked like working dogs who work for 34,926 hours (OK, we actually drank lots of rum for some of thse hours, but still), and I am happy to announce that my kids finally have rooms. There are still a few odds and ends to be tied up, but thank Jeebus, we finally, finally, can all get a little space. It feel as good as you would expect it to feel when three people, a dog and a cat and crawl out of each your ass.
. 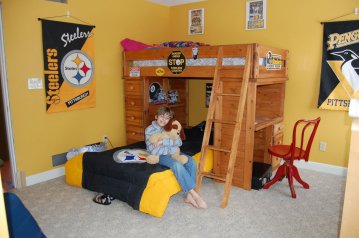 Once again, I watched Big Brother and once again I was sickened by the wastefulness. This time, they had at least 600 pounds of asparagus that they used for a stupid game. I thought that maybe, since it was still fresh that they could donate it, but noooooo. After the game was over, those fucking morons started throwing it at each other. God, I hate those people. Just once, I’d like to hear someone express concern over the terrible waste. They’d be my new reality TV hero. Oh – and making this competition even more vomit inducing? The fact that the women had to be weighed and the comment was made about the one being a “whopping” 130 pounds. Dear god, we are an obscenely fucked up country.

And speaking of things obscene, it’s only been one day and I am already sick to death of hearing about Ben Rothlesberger’s new deal. Anyone who knows me knows that I am a huge fan of all the Pittsburgh sports teams (though the Pirates are seriously testing my ability to give a shit). That said, it absolutely sickens me to hear about the money that athletes make. 102 million dollars? Even after the agent gets a cut and taxes come out, he’ll still pull in over $100,000 a week. A week! And yet, I had a conversation with someone the other day who is living with an injury because she can’t afford to get the surgery to fix it. And driving into work, I see an elderly man in a wheelchair getting soaked in the rain. And on the way to mr b’s office, I pass a little camp of cardboard boxes, with sad, lonely hungry people inside.

You know who should make 102 million dollars? She should. And the other people who do what she does every day. And you know what they would do with all that money? They’d most likely start feeding people. And building houses. Not running immediately to the luxury car dealership and driving away in a planet-destroying Hummer or penis-waving Maserati (that mr b saw Ben driving away from the dealer at just about the same time they made the announcement of his deal).

In other news, this renovation is killing me. It’s almost done. We’re thisclose (of you don’t count the entire “old side” of the house that will have to be updated next). Unfortunately, I have experiences years of thisclose before. Neither mr b nor I are particular go-getters. It’s hard – you work, you have kids and their schedules to deal with, family, housework, dinners, etc. The last thing you feel like doing is working some more when that’s all done. Add to it that the house is in such disarray all the time and it sucks what little motivation we have right down the drain. It’s a vicious cycle – you can’t do A because B isn’t done, and B can’t be done until C is done, but C can’t be done until the giant mess gets cleaned and you make room for D, but the giant mess doesn’t have anywhere to go unless A gets done and so on and so one and sofuckingon.

Two bits of good progress are that mr b and his nephew got the wood floor installed this weekend and the carpet for the kid’s bedrooms was installed yesterday. The girl’s furniture is coming on Saturday and I have my SIL Weenie coming that day to help me get the boy’s room moved. So there IS progress. Of course, I am stressing about Weenie’s help, since I feel like I need to do some pre-cleaning prep work beforehand and there is just no time to do it. Also – there are things that need to be done in those rooms (like installing lights and some trim painting) and I am afraid that they will never get done. Because I have met my husband before. I have lived in a half finished place for so long and I am nervous about it going on forever. My biggest fears when I signed on to do this were 1) not finishing things, and 2) finishing the “new” part and not the “old”, and living in a half nice/half crappy house. Sigh.

Anyway, the guy that installed my carpet yesterday freaked me out a little. On one hand, I felt a little bad for him – he was talking a bit about his health problems and lack of health insurance (hear that, GW?), but on the other hand? I think he was batshit crazy. In the short time I spent talking with him, he asked me how we were paying for the addition (did you hit the lottery? Um, no, we lived in squalor for 10n years and saved) and made two “jokes” that were a little uncomfortable – calling me selfish and spoiled (comments that from your friends would be funny, but not from a stranger). He expressed concern over his money problems (which I sympathized with, but was uncomfortable given the fact that I was paying him). He then mentioned his bad temper and problems controlling it (I wondered if perhaps I should don my bat mask*). And finally, the dog was thoroughly suspicious of him. He usually loves everyone – at least after he barks his fool head off for a while. I have to say, I was glad when he was gone and I locked the door before he was even off the porch.

* For those of you who didn’t read me at the old place and don’t know what I mean about the “bat mask”, here’s a link to the weird, yet somewhat hilarious, crackhead hooker-punching story.

I love my floor. And my carpet. And even my stupid dog that hid behind me when the creepy carpet guy was there: 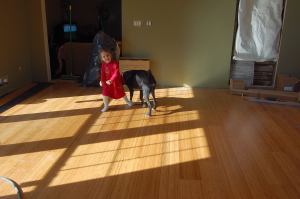 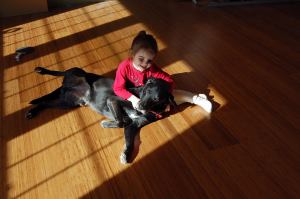